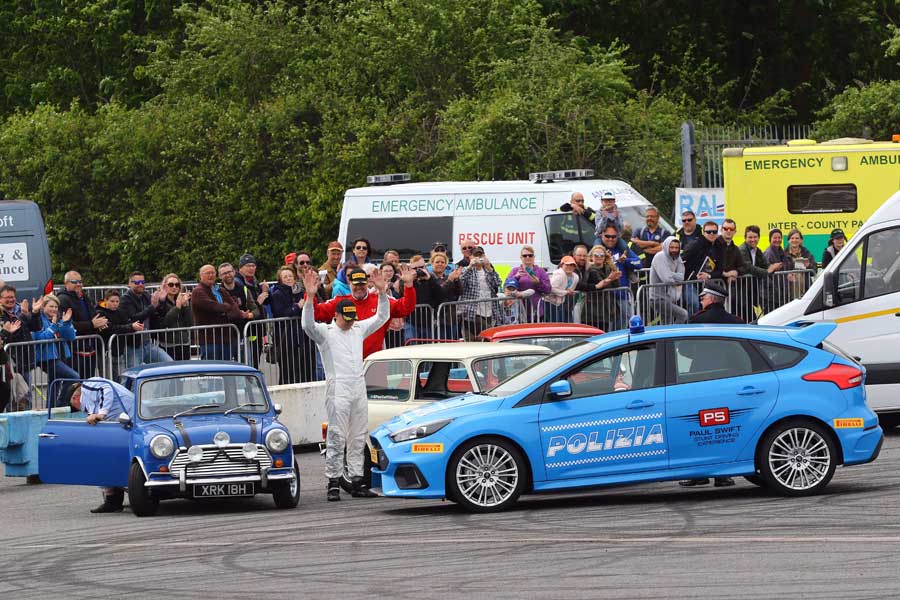 Stunts and racing will ensure fans 'get involved' at Donington...

The theme of this year's Donington Historic Festival is "get involved" and, while that might not mean hurling a priceless Jaguar around the historic Donington Park circuit, organisers have something just as fun in mind.

For the seventh incarnation of the hugely popular three-day event, due to take place over the last weekend of April, they've delved into their contact books to rope in a series of thrilling side-line attractions in which people literally can
"get involved".

Of course, the backbone of the Donington Historic Festival remains its racing, but if the list of historic cars that will be taking to the track doesn't whet your appetite enough, the prospect of what else is on offer certainly should. For example, how do you fancy learning to drift and perform doughnuts in a Caterham sports car? Or perfecting the art of a handbrake turn with a true legend of the stunt-driving scene. Keen to show off some of the activities festival-goers will get to try out, the organisers invited me to Donington ahead of the event to give me a flavour of what it will feel like to "get involved."

And they started off by introducing me to something of a hero of mine, Paul Swift. I've grown up watching his father, Russ Swift, perform seemingly impossible tricks and stunts in cars. Remember the 1980s Austin Montego advert in
which an office-worker has to drive on two wheels to get a space? That was Russ.
But it's not as if Paul, 37, is living in his 66-year-old father's shadow. He might have learned his craft on his dad's lawnmower, but he's paved himself an incredibly successful career working with some of the biggest names in the
business. He was even a star turn at the Top Gear Live shows before... well, we all know what happened there. But now, aside from performing stunts at shows, he tours the country teaching some of the basics as part of his
own Stunt Driving Experience. And that's what he's come to Donington for; to show me what will be on offer to visitors of the Donington Historic
Festival.

"We'll start by getting it on two wheels", he casually informs me, keeping an eye on the grey clouds rolling in and strapping himself into the driving seat of his Ford Focus ST. This is something of a party piece for Messrs Swift, and it takes a few choice car modifications, a large ramp, and alot of nerve.
"Hold tight!" He urges as we approach the surprisingly high ramp at a speed I'm not entirely comfortable with, left wheel lined up perfectly.

What happened next was not fun. The car's suspension compressed as it hit the ramp, launching it into - at least what my mind was telling me - was about to be a painful barrel roll. "Once it's up it's like riding a mountain bike," Paul nonchalantly informs me as he leans over a bit and, with just one hand, makes quick but small adjustments to the steering, as if this is a completely normal scenario.
I'll be honest, I was terrified. The feeling of sitting in a car - a very familiar environment - when it's pretty much on its side and moving along is extremely unsettling.
Don't get me wrong, Paul is incredibly talented and there was no chance we were going to fall over. He's been doing this since he was six on that ride-on lawnmower.
I was just starting to get the hang of it when Paul explained what was to happen next. In showbiz terms it's called "playing up to the camera."
We had a photographer on the end of the Melbourne Loop and Paul was explaining how I could stand up in the car to smile at the camera. Yep, while we were on two wheels. "Stand on this bit," he said, tapping his hand on the side of the centre console - which was, of course, vertical at this point. "Then grab this door handle and use it to pull yourself out of the window." Part of me hoped he was joking but,
alas, he wasn't. I managed to get my head out, but smiling for the camera was a step too far. A grimace was all I could muster. It was exhilarating, though.
Next, it was my turn behind the wheel. We were going to try the classic reverse spin and the handbrake turn. Two stunt-driving staples.
Paul is a brilliant teacher. He has a calm, soft and endearing North-Eastern accent and knows how to get the best out of a complete novice whose only experience has been a rather unsuccessful and embarrassing attempt in a
Tesco car park. Years ago, I might add.
I got the reverse spin, that went pretty well. The handbrake turn was trickier to master, simply because of the sheer force you need to yank the handbrake up while the car pitches into the turn.
It has to be said though, it was huge fun.

The second activity the organisers wanted to show me was drifting in a Caterham sports car. Hire company BookaTrack and sports car manufacturers Caterham have a base at Donington and love to show up at these events, so teaching visitors to behave like The Stig is a perfect fit. This is also a lot harder than it looks. Getting the magnificent little sports car unsettled to the point where its wheels are spinning and the back end is waving around in a Jeremy Clarkson-esque way is a doddle - but getting it under control is very difficult.

It's all in the right foot, I was assured. The steering wheel is pretty much incidental once you've learned to balance the power and use the spinning rear wheels to point you in the right direction. It's incredibly counter-intuitive but
immensely satisfying when you find the sweet spot and manage the perfect doughnut. I'm ashamed to say, however, that many cones were harmed in the making of my new-found skill.

There's lots of other things to try at Donington Historic Festival. Organiser Richard Grafton, from Historic Promotions, has hinted there will be some Group B rally cars which will hopefully give passenger rides and a charity offering supercar rides in exchange for donations is also booked to show up.
He said: "There is nothing like getting close to the action and experiencing historic racing cars in all their glory.
"Donington is a great venue for allowing visitors to become part of the story and, now that the site has even more space available, we have an exciting opportunity to expand what we can offer.
"This year, we wanted to create an immersive experience, so we've secured more content in which people can participate.
"It is an event that gives visitors close access to exhilarating entertainment, and we want people to leave Donington Historic Festival with a sense of delight and amazement at what they have experienced."
While there promises to be plenty to do away from the circuit, which straddles Derbyshire and Leicestershire, it's fair to say petrolheads will have more than enough reason to monitor the historic track too.
Some of the nation's most precious racing cars will be taking to the track, and a host of celebrities will be either milling around the stalls in the Paddock and the in-field, or taking to the Tarmac themselves.

Tickets for the festival, are on sale now and are discounted if bought in advance. A Friday adult ticket costs £16 and Saturday and Sunday tickets cost £21. Children under 16 go free.
And, interestingly, if you own a car built before 1990, you can book a free display parking space in a special parking area inside the park. Another good way to get involved.
While it might be billed as a "historic" festival it's clear the organisers have pulled out all the stops to ensure it appeals to all ages.