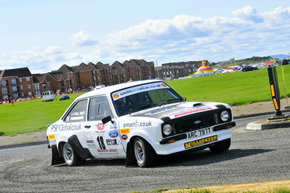 After an eight month absence from the sport, Darlington precision driver Paul Swift returned in fine style with a double success in as many days to claim runner-up spot on both events.

A good run through Friday night's stages had the pair fourth overall and leading their class at the overnight halt and despite a few issues with timings and results, Swift continued his climb up the leaderboard.

By half distance, the seven times British Champion and a multiple Guinness World Record holder was up to third overall as he diced with the likes of Mark Holmes in the MG Metro 6R4 and Geoff Roberts' powerful Darrian T90.

Not knowing exactly where he was placed prior to each stage, Swift ploughed on and by the penultimate stage was up to second overall. Armed with new tyres, he had a push on the final test to claim a superb runner-up placing just 17 seconds behind the Subaru WRC of Simon Bowen.

The following day, it was up to Sunderland for the Wearside Classic Rally whereby Swift swapped his modern car for his historic-specification Ford Escort RS2000 Mk1 with wife Jessica in the co driver's seat.

The pair were having a good run until they suffered brake failure which meant they had to complete the remaining stages without stopping power, but despite this, they went on to claim second place overall, ironically 17 seconds behind the winner in a repeat of the previous day.

Paul Swift: "It was the first time since the Jack Frost Stages in January I'd competed but I found myself back in the swing of things quickly on Friday night. On Saturday, it was a case of knowing how hard to push because we didn't have a lot of information as to who was doing what or where we were, so we adopted the Colin McRae motto of 'if in doubt, go flat out!'. The car was on the rev limiter in top gear at over 115mph in places such was the speed and it was a bit hairy in places, but we managed to bring it home without too many problems and there's no disgrace in being beaten by 17 seconds by a Subaru WRC. Sunday was a lot different and we enjoyed a good run around the challenging stages of the Nissan test track. The brake failure then cost us victory so it was ironic that we finished second again by exactly the same margin, I guess it just wasn't meant to be!"

Paul is now set to embark on a tour of the Far East with the various stadium tours he performs at including Top Gear Live and another show with former presenters Jeremy Clarkson, Richard Hammond and James May.

Further information can be found at www.paulswift.com/motorsport.

Paul would like to thank his 2015 sponsors and partners: