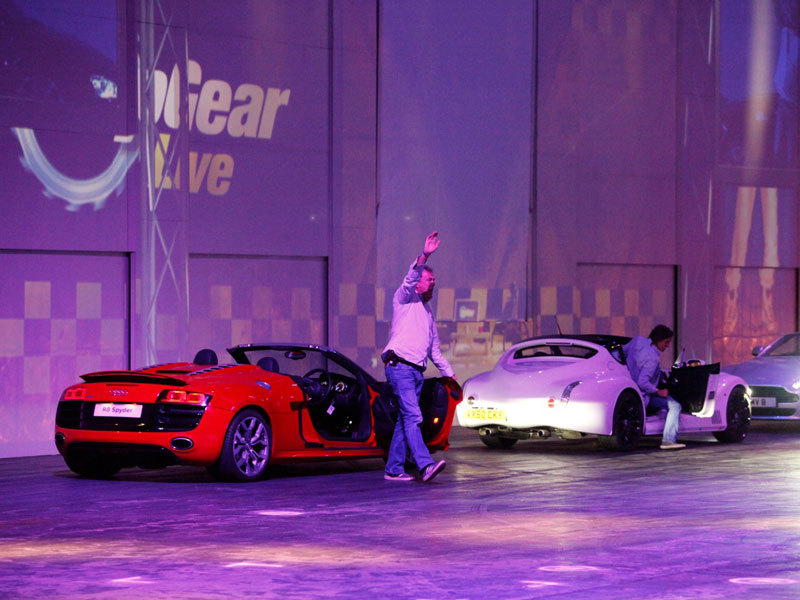 He's performed to millions of people in some of the biggest arenas in the world.

But almost no one will have seen his face.

He is Darlington stunt driver, Paul Swift, and this weekend he is back in the North-East for what he says will be his biggest gig yet when Top Gear Live comes to the region.

Swift, the son of the legendary Russ Swift and whose company Paul Swift Precision Driving is based in his hometown, will join Jeremy Clarkson, James May and Richard Hammond at the Metro Radio in Newcastle for a series of shows on Friday, Saturday and Sunday.

Those lucky enough to get tickets will be in for a high octane mix of super cars, present challengers and stunt driving all interspersed with the kind of irreverence that has made Top Gear the most watched TV programme in the world.

The live show has played to audiences all over the world, but this is the first time it has been to the North-East and it will be a significant occasion for Swift.

"It will make the hairs stand up on the back of my neck and probably bring a tear to my eye," he said.  "Last year we did a show in Poland for 57,000 people and the won't mean half as much to me as it will to perform in front of eight or nine thousand this weekend when my Mum and Fiancee are sat in the audience watching."

Swift said that while Clarkson and friends might give the impression that everything is thrown together at the last minute, a great degree of planning is involved in order that the stunts have the desired effect on the audience.

"A lot of the ideas are discussed well in advance and there's quite a lot of engineering involved as well," he said. "With the majority of sequences there's some kind of trickery involved, aside from the driving. When I do my own show I normally turn up in a standard Ford Focus and do the best I can with that particular car, but with this show it's not enough to impress people with your driving, there's got to be some element of surprise, be it the car setting on fire or cars with the bodies on backwards.  There's always some sort of surprise and that's what sets it apart from the other shows."

Swift has been involved with Top Gear for the past ten years and interst in the live performances has grown with each tour.

"There is a high expectation when people come and see the live shows," he said.  "And with my job, there's no chance for a second take, it's got to be perfect, we have got to get it spot on every time.  That's where the pressure element is.  People pay good money to come and watch the show and you cannot get away with anything. There's only one part of the show where I can't perform to my best and that's car football because we have to give the presenters a chance."

Swift said he and his team have a great relationship with Clarkson, May and Hammond.

"Every show we do we are performing with them.  Jeremy has said that he would never like to do a Top Gear Live without us so it's great that we have got that endorsement," he said.

While Swift and his colleagues are meticulous in their preparation, there's one person who is not good with the fine details.  The man known simply as The Stig.

"He is loaded into a container, shipped around the World, turns up on a pallet five minutes before the show and away he goes," said Swift.