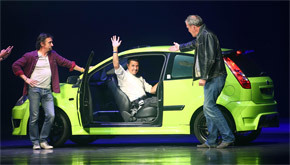 The long-awaited 'Not Top Gear Live' show went down a storm with the 5,500-strong Odyssey Arena audience of men, women and children - but mainly blokes - last night.

Jeremy Clarkson, Richard Hammond and James May kicked off their Clarkson, Hammond and May Live world tour in Belfast to a roar of approval. Supercars, stunts, loud rock music, screeching tyres, "automotive pornography" and lots of banter made for a fun show from the motoring trio. Hammond and May rode into the arena on motorcycles and then Clarkson - bedecked in trademark dad jeans, checked shirt and leather jacket - appeared on a hovercraft with Eye of the Tiger pumping out of the speakers. "I'm here," he announced to rapturous applause. "Welcome to, for legal reasons, what's called Clarkson, Hammond and May Live."

The 90-minute show had previously been billed as Top Gear Live, but was stripped of BBC branding after Clarkson was dropped for punching producer Oisin Tymon in what has been characterised since as "a fracas" caused by the presenter being offered cold meats instead of a steak. The media suite fridge at the Odyssey was packed with beer and grub such as meat pies, spuds, ribs and chicken was served up for the international press pack who had assembled to see what the trio were offering the public since their departure from the Beeb. I was tempted to demand a steak, but thought better of it.

Clarkson explained they decided to start the tour in Belfast because they genuinely like the city, it was "a long way from Daily Mail offices" and gave one newspaper the opportunity to use the phrase "Belfast and furious". The mildly offensive chat you would expect from Clarkson, including jibes at the French and comments about wheelchair access, was delivered but as he explained, he doesn't work for the BBC any more so can say what he wants. In Belfast terms Clarkson is 'a big eejit' but very entertaining.

And after joking about knowing Hammond's proportions better than most, he added topically: "I'm going to get a cake made with Bert and Ernie of it." We were treated to an incredible display of driving precision and accuracy from Paul Swift and his stunt driving team and then Clarkson, Hammond and May took part in a drag race featuring a washing machine and an ironing board.